It´s that time of year again where everyone is forced to reflect upon the twelve months newly behind them as they prepare to take on a new twelve month cycle. This has always really baffled me, the idea of a ¨new year, new me.¨ I don’t understand exactly what makes January 1st any different than February 1st, or March 23rd, or why the twelve months that lay between January 1st and December 31st are any more unique than those that lay between April 2nd and April 1st. In terms of micro focus, the year is a good framework for setting and achieving goals, but I think it can be equally limiting. It’s almost like giving ourselves permission to absolve ourselves of our faults and failures of the previous year, as if they are something to be ashamed of and forgotten, rather than learned from, in favor of the turning of a new leaf. I personally love the challenges I faced in 2019 – and they were numerous – because sitting here typing to you is the proof that I overcame them. 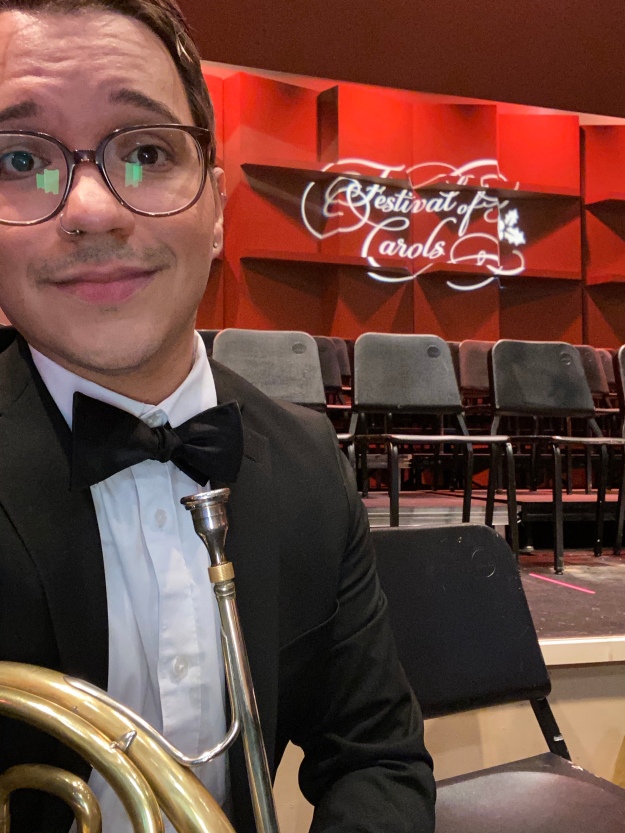 I had some really tough moments in 2019. I faced the my personal darkest, deepest, and longest bout of depression to-date and I found myself beginning to think there would be no end. I also had some really cool moments. I performed with The Who (yes, *The* actual *Who*), Weird Al Yankovic, I got to live a lifelong dream of performing Harry Potter Live in Concert (The Deathly Hallows Part 1), my quartet (Skylark) recorded an album (STAY TUNED), my niche jazz/Caribbean trio Julia’s Child found some really cool community support. Toward the end of the year, my husband began to stand on his own two feet as a full stylist at the salon where he had been apprenticing for over a year, I applied for an Associate Instructor position at the Jacobs School of Music and got it, so now I get to go back and finish my doctorate while teaching and mentoring other horn students. This year really bounced me around, and while I had many triumphs, I had an equal amount of failures.

When I entered 2019, I made a vow to myself to reframe my perspective on failure. Failure – to me, now – is not the antithesis of triumph. It is an integral part of the process of success, and that is a hard pill to swallow when you have been made to believe (by society, family, etc.) that failure and being unsuccessful are inextricably linked in that to fail means to hinder success entirely. Failure, to me now, is a call for introspection. And I say introspection and not examination intentionally. To examine is to seek imperfection, to introspect is to seek to know oneself more intimately. The key to understanding failure isn’t examining what went wrong, it is to become familiarized with the walls and blockades that prevent us from expressing our potential to its full capacity.

I failed a lot in 2019, and in the soul searching that followed those failures I learned a lot about myself. I learned that my anxiety prevented me from taking more second steps than firsts, that initiating an action was easier for me than sustaining one. I got myself into some pretty tight financial situations, and for nine months I struggled to pull my own financial weight in my marriage. I learned the significance of faking a smile. Because sooner or later, that fake smile becomes routine, and that smiling routine inspires smiling by others, and that collective smiling inspires real joy.* I took a lot of auditions that did not result in a job offer. That is a process many of my musician friends are quite familiar with, and it’s really tough to wake up the following day and put the horn back on your face. But I also learned that as long as I am connected with my purpose, overcoming those hurdles can sometimes be fun and doesn’t have to feel so defeating. I learned to find joy in the process of becoming better, and I am finding that striving for a career as a professional musician is as much a mental feat as it is one of technical proficiency.

I am really looking forward to my next arbitrarily chosen twelve-month cycle, which can, in reality, be chosen on any day of the year, I just happen to be jumping on the bandwagon in this case. 2020 is going to be my year, because I intend to take ownership of every moment of it.

In October, just before Halloween, I had what you might describe as a religious experience, un-ironically as it happened to occur while playing a gig for a church service. I don’t really consider myself religious. I don’t ascribe to any religious dogma or label myself as Christian, or Buddhist, or Atheist, or Pagan (anymore). I do, however, consider myself a spiritual being, and this physical vessel that I have been gifted is merely the lens through which I get to experience the universe.

If you read my last blog (which I highly recommend you do if you haven’t, if for no other reason than to know me better), you’ll remember that I was having a pretty tough time with the dress code, as a person who identifies as non-binary. “Men wear suits, women wear all black,” is the phrase that really turned 2019 around for me, and for that I will always be grateful. Because the following day, after the rehearsal that inspired the blog post, I sat through a sermon that was entirely about accepting your flaws and embracing them as divinity.

I used to be very spiritually active, before my mother died in October, 2012. I was heavily involved in the local pagan community: I meditated regularly, dabbled in spellwork, and participated in monthly moon rituals. I studied literature about chakras and energy work, and praised Paganism: An Introduction to Earth-Centered Religions as one of my most life-changing reads (still do, even if you aren’t interested in earth-centered religions, it is really great resource for understanding earth-centered perspectives), and after her death, I felt immediately and inexplicably cut-off from all religious and spiritual experience. I began to live completely in this world, the one that revolves around careers and bills and capitalism. Even my horn playing changed, for better or worse. I was practicing less musically, with less inspiration, and I was focused solely on the technical aspects of my musical journey. All of this, in conjunction with my grief, further isolated me from the person I truly believed I had lost. I would spend the next seven years trying to find that person again. I tried everything I used to do to reconnect. I tried to meditate, I tried to ground myself in nature, I burned incense, I used crystals, and even my training as a Reiki Master seemed to have no discernible impact on my ability to “find myself again.” Over the years I had come to feel hopelessly lost (remember that depression I mentioned earlier?). But that all changed during a Presbyterian service, for which I was part of an orchestra playing parts of the Brahms Requiem, among other hymns and such.

I had walked into the gig completely overwhelmed with anxiety. I had chosen to wear neither a suit nor all black, and in the middle of the service, the conductor motioned for me to join her on the podium. She hugged me, and I don’t think I will ever be able to fully express my gratitude for that hug. I can only describe what followed as the most validating sermon I have ever sat through (and I have sat through a lot of sermons). I’ll spare you the details but my takeaway from the experience was there is nothing wrong with me. I am as spiritually engaged as I have ever been, and the only thing standing between me and my feelings of wholeness was my belief that I was no longer whole. Grief will do that, of course, especially when not dealt with in a healthy manner. It will instill a deep sense of emptiness, sometimes so subtly that it goes unnoticed at first, but it grows quietly over the years, and I think mine grew right up until the moment I was prepared to acknowledge and confront it.

That gig changed my life. I not only feel, once again, that I know myself, but I feel like I’ve known myself all along. I don’t feel like I was ever lost, I was just healing. And that is my triumph of 2019. I post a lot about my objective successes regarding my Horn career. I post less about my objective failures and even less about my personal ones. In every blog post I share, there is always some element of vulnerability. I usually say something like, “…sharing is so important…” or “…vulnerability is the key to unity…” or something else cliche and corny, and I do say these things because I believe them, of course, but really I think it is my subconscious trying to instill this message in me.

I am going to turn 30 this year, and to be honest, I’m dreading it. I am dreading it because I will not be, at 30, where I have always been led to believe I should. I won’t own a home, I won’t be working full-time in my field, I won’t have children (not that I particularly want them). Instead, I’ll be barely making a livable wage, still living the starving artist life, still living in a studio apartment, and still looking at all of the greener grass on the other side of what seems to be many, many other fences. But I am going to really try to change that. Because, I have so much to cherish and I have so much value to share. I guess what I am trying to say is that in spite of my own misgivings about what 2020 might have in store, I can’t wait to get started, and I can’t wait to share what I learn along the way. So here’s to 2020, except it won’t be a new year or a new me. It is just another year in the continuation of my story, and I really look forward to sharing it with you all.

*It is important that I note here that I do conflate fake smiling with feigned emotion. It is totally okay to feel however it is you feel, whenever you feel it. But making small efforts to inspire joy in yourself and others can result in big changes in mood and overall outlook.