This is a heavy one, so sorry about that. If you are looking for something light and uplifting, might I suggest Buzzfeed’s list of the 50 Absolute Fattest Cats? If, however, you are not bothered by some of the more intimate details of my life, or if you are searching for validation in your exploration of gender identity, please read further!

I feel like one of the biggest hurdles is in life is the search for the answer to “Who am I?” Until recently, I don’t recall having ever had the freedom to really go out and find those answers for myself. From the beginning of my life, I was told who I was. I was told what was and was not “appropriate” for me to wear, to play with, to be. I was told not to practice my cartwheels on the playground if I didn’t want to be called girl (because omg the horror amiright?). I was forced into sports – by an abusive, hyper-masculine, drug-addicted, piss-poor-excuse-of-a-human-being step father – in an attempt to masculinize me. And no matter how loved and supported I was, I was constantly being sent a message that there was something not-quite-right about me, and that I need to be fixed, that no matter what I did, it wasn’t me.

As a toddler, I was sent to a therapist to be “diagnosed.” My characteristics were too feminine for a boy. And, despite the valiant efforts of my family, I just would not assimilate to the typical “boy” behavior. Surely a three-year-old can’t possibly have instincts of their own. Children need to be molded and sculpted. And if crafted just right, a perfect carbon copy human will emerge into adulthood fully armed with blind religion and a completely unfounded moral compass that may or may not reflect an ideology of actual morality. Who needs freedom and self-identity anyway?

Now, 27 years into life, I find myself at a pivotal point. I have been feeling the groanings of a person inside of me, banging on the inner walls of my chest to be freed and released into the world for years. But I have always kept them silent. Emboldened by adolescence, or exhaustion, I would occasionally try and let just a little of them out, just to stave off the nauseating effects of holding them in, like trying to silence the piercing whistle of a screaming kettle without removing it from the heat of the flame – but only briefly.

My first memory of these feelings comes from the 1st grade. At six years old, I convinced my mom to let me get highlights. They were all the rage in 1996, and I was madly in love with the Backstreet Boys. They all had highlights. It felt like a perfectly acceptable and appropriate thing to do. So, we went to Walmart and plucked a D.I.Y. highlighting kit (for medium to dark hair) off the shelf and went on our merry way. I remember complaining the entire time, too. This was before they included the plastic option for the scalp-shredding, skin-carving hook-of-death for puncturing the holes in the tightly fitted cap, looping the hair, and RIPPING it back through. Not to mention that bottled bleach burns like cayenne pepper in an open wound. But it was #worth it because pain is beauty. So, I showed up to school the next day. Beaming. Proud. Feeling fierce. 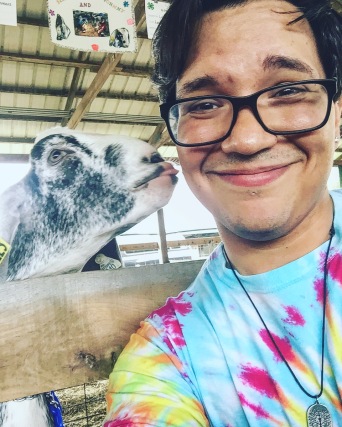 “Only girls highlight their hair,” my teacher said.

Let’s just take a moment an acknowledge the immense power of language, because in just five words I learned Shame, and I have carried it with me ever since.

I came home crying that day, the first of many tearful returns home. “Sweetheart, if you don’t want the kids to make fun of you, maybe you will just have to be less girly.” As loving and as supportive as she knew how to be, my mother’s words were just proverbial nails in the metaphoric coffin. My metaphoric coffin. I weep (metaphorically) every day for that six-year-old. That metaphoric coffin would be my prison for the next 21 years.

I had the Shame thing down; I knew it as part of me, like avirus swimming through my veins, replicating by the millions each passing second, clinging to my soul, starving my lungs of the very breath I needed to find my voice. I was so ashamed, not of being feminine (because #feminism), but of failing to meet the so-clearly-laid expectations set for me by the world I was born into.

I tried to assimilate for so long. I tried to blend in. I tried to just keep myself busy to silence the constant crying-out of the person inside for freedom. But, I hated everything about myself – about the way I had to present myself the world just to keep everyone else quiet and happy, for their approval.

Eventually, out of complete, exhausted surrender, I stopped dying my hair. I kept it short, neat, clean, masculine. I stopped trying to push the envelope. And after years of bullying, even my skin got thick. I learned to swallow every lump in my throat. And I did it all just to fit in. To be un-noticed in ‘that’ way.

I wasn’t even really sure how to speak up. My mother was so loving and supportive but I didn’t even know how to tell her what I wanted or what I needed. So I just allowed it all to continue without uttering a single word about how I was hurting, or that I was even hurting at all. Despite how much I knew she loved me, I was always afraid of disappointing her.

Fear has been such a close companion throughout my life that I cannot even imagine living without it. Fear is not just one sided, either. Fear is 360°. I was afraid of rejection, but also afraid of acceptance. Acceptance might be the scariest part of it all, because acceptance means it’s time to face the world. Acceptance means you can no longer rely on the fear of rejection. Acceptance means vulnerability. Vulnerability is terrifying. But, it is human.I am afraid. I am afraid and I am angry, but I am exhausted, and my skin is getting thinner; so thin that even those on the outside are beginning to notice the patient yet eager rapping on the other side of the door from inside my chest by someone who has been waiting far too long to be introduced to the world. I am angry that, until now, I had never had the courage to tell them they were all wrong.

I guess this is sort of a “coming out.” I am coming out as the person many of you have never known. A person who seeks to confront the world with truth and authenticity, with curiosity and wonder, who has finally decided to live as the universe has always intended.

Don’t ever let anybody tell you who or what is or is not “you.” YOU are the only being in this universe with the authority to decide what is and is not “you.”

Don’t ever let anybody tell you that you are wrong about who “you” are. You know, and You are as authentic as You will ever be.

Don’t ever ignore or suppress your voice. Letting it out is the only way for You to be heard.